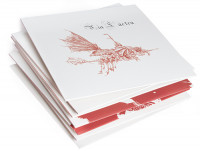 This new box set just released in Germany offers a flashback to what was perhaps the greatest musical era and some of the most original music produced in the late 1970’s to mid 1980’s.

This Box covers many of those experimental artists from Mexico such as Aristeo, Via Lactea & Carlos Alvarado, Hilozoizmo, Decibel, Oxomaxoma with Arturo Romo & Jose Alvarez & Miguel A. Ruiz and Voldarepet with Arturo Meza, Juan Wolfang Cruz and Marco A. Godinez.

This kind of music opened a door to an incredible new chapter for many people in the music-scene; One of those discovering the outstanding and amazing Experimental Music from Mexico as early as 1979 has been Archie Patterson of Eurock-Magazine who started to distribute experimental music primarily released on Cassettes which he had also covered and written about in his magazine established in 1973. At that time, visitors from south of the border came to LA bringing him and a few others music-cassettes and LPs, shortly after coming to buy music and take it back to their record stores in Mexico City. A musical link was created that still exists today.

Today there still is nothing that sounds like what you'll hear when listening to the sounds on these long lost cassette artifacts, produced by Vinyl On Demand, thanks to direct communication through KBOO.

The Mexican Cassette Culture box set offers indisputable proof that music is the one art form that transcends time as well as all cultures and geographical boundaries. La Ruleta is proud to present these important documents already broadcasted before on this show, but this time having an edited version to present this beautiful new release directly from the LP's.