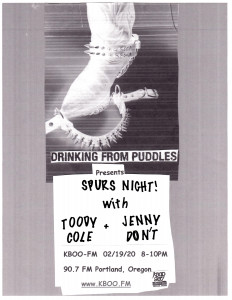 The unfortunate passing of Old-PDX/Satyricon nightclub icon Bruno Berger has spawned a Memorial Rock-N-Shop and Benefit to be held at Dante's in Downtown Portland on 02/21/2020, which will include among an amazing roster of Satyricon-band vets, a special rare appearance from Toody & The Spurs playing the songs of Dead Moon!. In audio preparation, Drinking From Puddles on KBOO-FM presents Spurs Night!

It has been an honor to present these musicians on my show in the past, in the bands Dead Moon, Don't, The Rats, Pierced Arrows, Snow Bud & The Flower People, Poison Idea and Jenny Don't & The Spurs, whose first ever public performance was on DFP for the radio premiere of the Fred & Toody Cole acoustic duo. And if that list already seems fantastical, their lineage also includes legendary Portland bands The Wipers, Napalm Beach, Resist, and more!

So although I wish Bruno was still here to receive his sonic-love in-person, I'm tremendously proud and excited to bring you this upcoming radio event and archive.

To listen to Bruno Berger being interviewed and reading from one of his memoirs (along with live sets from other 02/21 Dante's Bruno Memorial Rock-N-Shop and Benefit acts Chris Newman of Napalm Beach and Monica Nelson of Obituaries) from 11/30/2016 go to:

As always, thanks for listening!

Update Required To play the media you will need to either update your browser to a recent version or update your Flash plugin.
Topic tags:
Music
Genre(s):
Eclectic, Live Performance, Punk, New Wave, Country, Rock and Roll