Insectuality: Love Songs and Death Dances from a Panamanian Rain Forest at OMSI 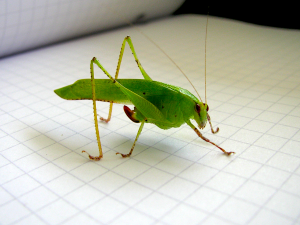 Tickets:  www.omsi.edu IMPORTANT NOTE buying a ticket DOES NOT guarantee entrance to the planetarium for this show ONLY. Planetarium doors are at 7:45 PM!

What does the world sound like to an insect? Or a bat? Here is your chance to find out by exploring the insect music you've never heard before in 5.1. surround under the Panamanian stars. We'll be slowing ultrasonic rain forest field recordings from a Dartmouth research team to 1/20 of their original speed. In this way, we will be able to hear beyond the veil of our senses and experience a small slice of life, death and love in the rain forest canopy.

Selections of this piece were originally aired as part of NPR's All Things Considered in April of 2017. The extended audio was originally aired on KBOO's Threshold Shift in September of 2017. OMSI After Dark is a 21+ event but is ability inclusive. ADA seating is available by request in the planetarium. If you enjoy this program, please consider joining Threshold Shift and KBOO Community Radio at the OMSI Planetarium on Tuesday, October 9th at 7:30 PM for Hear and There:  Audio Postcards from Earth. Hear and There is a new type of immersive event from Echo Collector Events in collaboration with KBOO, OMSI and a team of artists, scientists and field recordists to bring the outside in and explore the interaction of sound and starlight as it occurs in nature. If you are here, we can take you there to experience what it's like to be in the field. This is happily a part of KBOO's 50th Anniversary Celebration.

Behind the Scenes Content:  How do Laurel and Hannah collect the sound? They climb into the canopy.

Laurel Symes is a Neukom Fellow at Dartmouth College with a joint-appointment in Psychological and Brain Science and Biology. She collaborates with other researchers to study decision-making and how it intersects with behavior, biology, neurology, and mathematical modeling. She has been working extensively with Bill McQuay to develop creative avenues for the public to access her teams' research and interact with it in their own lives. This often requires climbing into the tops of forest canopies to install recorders that will capture the vocalizations of the species she works with and getting to hang out with lots and lots of awesome bugs.

Hannah ter Hofstede is an Assistant Professor of Biological Sciences at Dartmouth College. She researches extensively in the field of sensory ecology, which studies how our senses evolved to understand and interact with our environment, especially as it pertains to survival and reproduction. This research requires an interdisciplinary approach that crosses into physiology, behavioral studies, ecology, and phylogenetic, or evolutionary, relationships. Most of her work focuses on the bats and katydids that spawned Threshold Shift's most popular episode. She also gets to hang out in the rain forest with Laurel climbing trees and spending one-on-one time with some phenomenal bugs.

Bill McQuay of Eco Location Sound is a career veteran in field recording and sound production. He is a long-time NPR contributor, independent audio producer, and his work has received numerous national recognitions including a National Academy of Sciences Award and a Grammy. Before launching his current project, Bill was Supervising Audio Engineer for the Library of Natural Sound at the Cornell Lab of Ornithology and a producer for their multi-media group. Prior to that he was an audio engineer and technical director for NPR programs including:  Morning Edition, Weekend Saturday and Sunday, Performance Today and Radio Expeditions. Nikki and Bill met at Cornell University's Field Recording Workshop in the Sierra Nevadas in 2016 and, after having fun working together with the Threshold Shift project, we decided to try for something a little different.