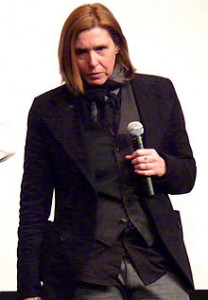 Patty Schemel has led an eventful life in the Pacific Northwest, having been the drummer for the band Hole for much of the 90s and a member or founder of several bands since the year 2000. She will be at Powell’s City of Books tonight at 7:30, to join Sleater-Kinney drummer Janet Weiss in discussion and later sign copies of her new book "Hit So Hard: A Memoir." The book covers her long career, but focuses in on her struggles and successes with addiction and recovery.

Patty Schemel stopped by KBOO studios this morning to talk with the station’s Finance Director, Macrae Bogdanov about her book, her life, and her music.

This is the full interview--a shorter version aired on tonight's KBOO Evening News.