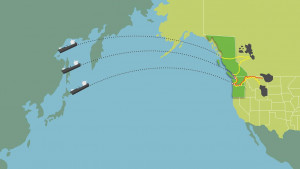 For nearly two decades communities across the Pacific Northwest have been fighting off multiple efforts to turn the region into a fossil fuel export hub. Today we’ll look back at the successes of what Eric de Place with Sightline Institute calls the Thin Green Line,

On this special Earth Day episode of Locus Focus we talk with Eric and Lummi Nation member Jay Julius about how far a powerful alliance of Northwest tribes, climate activists and community members have come in stopping most of these proposals. . . and what are the next steps to reinforce the Thin Green Line.

Eric de Place, director of Thin Green Line at Sightline Institute in Seattle, spearheads Sightline’s work on energy policy. Known as a leading expert on coal, oil, and gas export plans in the Pacific Northwest, he is considered an authority on a range of issues connected to fossil fuel transport, including carbon emissions, local pollution, transportation system impacts, rail policy, and economics. He has researched and published more than four hundred articles, reports, and analyses on these proposals, and his work on fossil fuel transport has been cited by regional and national news media outlets more than a thousand times.

Jay Julius is a fisherman, father, and proud Lummi Nation Tribal member who upholds his Xa xalh Xechnging (sacred obligation) by continuing to empower Native leadership, and to advocate for the Salish Sea. He has served as Chair of, and on Council at, Lummi Nation; has organized and executed Tribal, local, regional, and national campaigns; and has working relationships at all levels of government.