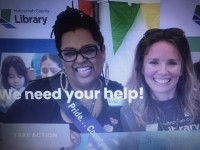 Byrd and Cathy Camper, both librarians in the Multnomah County Library system and members of AFSCME local 88 talk about impending layoffs. In the midst of a pandemic, where some library workers are working from home, some in the building or out in the community, some on administrative leave, the director of the Multnomah County Library has decided on layoff of 14% of the 516 library workers because keeping a “significant portion” of the library’s workforce on paid administrative leave is “not fiscally responsible.” This kind of neoliberal business-speak is infuriating but unfortunately is the kind of attack a lot of us who work in the public sector are facing. What’s doubly infuriating is that the money is in the budget, there is no budget shortfall