An in-depth look at the Psychiatric Survivor Movement 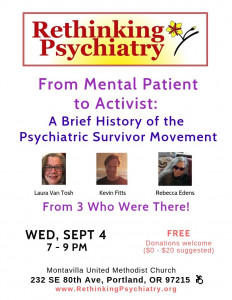 At Portland-based Rethinking Psychiatry's first public event of the season, three panelists will discuss the psychiatric survivor liberation movement from the late 19th century to today, both historically and from their on-the-ground perspectives, having helped make that history. They are Laura Van Tosh, from Seattle, founder of the Mental Health Policy Roundtable; Kevin Fitts, Executive Director of the Oregon Mental Health Consumers Association; and Rebecca Edens, President of the Oregon Consumer Psychiatric Survivor Coalition. Their talk will be followed by a question-and-answer period. The event is Wednesday, September 4 7-9 PM at the Montavilla United Methodist Church, 232 SE 80th Avenue in Portland.

Laura Van Tosh is a peer who has held policy positions at the National Association of State Mental Health Program Directors, University of Maryland, and the State of Oregon Health Authority. She is the founder of the Mental Health Policy Roundtable that met in Washington, D.C. for 8 years, and started a local version of the policy roundtable in King County, WA. The roundtable brings newcomers and veterans of policy together in a neutral environment of learning. Laura has written extensively about peer operated behavioral health care services and homelessness and has worked inside three state psychiatric hospitals. Her work is born from her experience as a patient turned activist and she has been involved with the peer movement since 1985.

In addition to his responsibilities as Executive Director of the Oregon Mental Health Consumers Association (OMHCA), Kevin Fitts serves on the State of Oregon Consumer Advisory Council (OCAC), State of Oregon Addictions and Mental Health Planning and Advisory Committee (AMHPAC), Unity Center for Behavioral Health Advisory Committee, Multnomah County Adult Mental Health and Substance Abuse Advisory Council Executive Committee (AMHSAAC), and “A Home for Everyone” Coordinating Council. There are other committees and boards, too, but you get the general idea. Kevin has a lot of energy and a lot of knowledge from a variety of roles in mental health services over the years.

Rebecca Edens, President of the Oregon Consumer / Psychiatric Survivor Coalition (OCSC), is a “Mindfreedom” fighter, advocate/activist, and is committed to securing the human rights and cognitive liberty of people labeled “mentally ill.” She is constantly reminding us that people cannot even begin their “discovery” process when suffering significant human rights violations. We all should be opposing oppressive psychiatric practices, even psychiatrists. Especially when the science says these practices are killing us.

Resources mentioned on the program:

Update Required To play the media you will need to either update your browser to a recent version or update your Flash plugin.
Download audio file
Topic tags:
Activism, Civil Rights/Human Rights, Disability, Health, Recovery