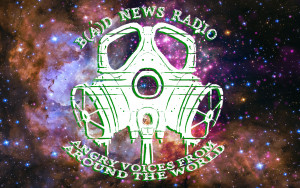 Welcome to the 24th edition of Bad News. This is your Angry Voices From Around The World for July, 2019.

BAD News: Angry Voices From Around The World

Welcome to the 24th edition of Bad News. This is your Angry Voices From Around The World for July, 2019.

If you’d like to get involved in the network or want to hear more – send an email to a-radio-network@riseup.net.
Check out all the shows look for the a-radio-network collection on archive.org or at our website, a-radio-network.org
On this month’s show we have:
Play it here or download it from archive.org
(total length: 23min 49sec)
musical track for breaks: Piaroa by ALBA from a comp called “Makhnovtxina 1919 2019”
Update Required To play the media you will need to either update your browser to a recent version or update your Flash plugin.
Topic tags:
Activism, Prison, Law/Court/Crime, Race, Global Affairs

END_OF_DOCUMENT_TOKEN_TO_BE_REPLACED

Too Much Information with Abe and Traci
The Great Resignation