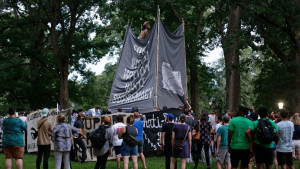 First, we’ll hear graduate student worker and anti-racist activist Maya Little speak about their research into the racist history of the constructed landscape and neo-confederate symbols in and around Chapel Hill and Carrboro, North Carolina. Maya also speaks about the recent resistance to the the specific statue called Silent Sam at UNC Chapel Hill and the far right and cop repression faced by students and anti-racist activists to push for and eventually enact it’s removal. Maya can be found on twitter at @readkropotkin and contributes writing to the project @CuddlePotMag. Within a few days of the broadcast, we hope to have links to the pictures spoken about in Maya’s presentation and to integrate those into the youtube post of this episode. This audio was recorded at the 2019 North American Anarchist Studies Network conference in Atlanta.

Then, Dwayne Dixon, an adjunct professor of cultural anthropology at UNC and an anti-racist activist talks about personal experiences of coming up in a white, military family in the U.S., experiences of struggle against white supremacists and their symbols in the so-called US south in recent years and the inspirational strength of those struggles interlacing and expanding into ecological defense work, disaster response and the building of autonomous, anti-capitalist community infrastructures. Dwayne is also involved in the community defense group, Piedmont Redstrings, as well as Take Action Chapel Hill and @DefendUNC on twitter.

If you listened on the radio, you can find a longer version of the show (including Sean Swain’s segment and a few announcements) as a podcast up at our website and various streaming platforms.

New Broadcasters in VT & OR!

We’re excited to announce that The Final Straw can now be heard on Fridays from 6-7am on WGDR, 91.1fm out of Goddard College in Plainfield, VT as well as in Eugene, OR on KEPW 97.3FM on Saturdays from 9-10pm local time. Hello, new listeners, we’re proud to be in your ears. Please reach out to us if you have concerns, critiques or suggestions.

Update Required To play the media you will need to either update your browser to a recent version or update your Flash plugin.
Topic tags:
Activism, Community Building, History, Military/Veterans, Race, African American

END_OF_DOCUMENT_TOKEN_TO_BE_REPLACED

Too Much Information with Abe and Traci
The Great Resignation