David Easley, Resisting From Inside 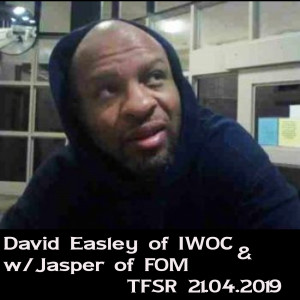 A conversation with incarcerated IWOC activist David Easley and an outside supporter, Jasper of the Free Ohio Movement, about resistance and repression inside the Ohio prison system.

****This show carries a heavy content warning for institutionalized violence against incarcerated people, suicide, and issues related to mental wellness//unwellness.******

This week I’m sharing a conversation with David Easley, an imprisoned member of the Incarcerated Workers Organizing Committee, or IWOC, currently held at Toledo Correctional in Ohio. In response to his organizing around the Nationwide Prison Strike in 2018, he and a few other prisoners were thrown into segregation, have had their mail tampered with and stolen. David has also been transferred between numerous facilities around the state as punishment, losing personal items and his ability to communicate with the outside along the way. We were also joined by Jasper, a supporter of David’s and a participant in the Free Ohio Movement. For the hour, David and Jasper talk about the prison system, the challenges they’ve faced opposing it and ways that folks can get involved.

You can write to David at the following address:

You can also keep up with David via the twitter account @OH4prisoners and on fedbook via the account david.easley.353. He also mentions jpay emails as a preferred means to communicate and can be reached with the above information at jpay.com. The case David mentions litigating can be found as Easley v. Zimmerman pending case: https://dockets.justia.com/docket/ohio/ohndce/3:2018cv02050/246954

David mentions a few other prisoners who have struggled and faced repression for facing down injustice in the Ohio prison system. Keith Lamar, aka Bomani Shakur, is a death row prisoner and author of Condemned. He needs public support to fight his wrongful conviction in relation to the 1993 Lucasville Prison Uprising and to hold the State of Ohio accountable. More on his case can be found at https://www.facebook.com/pg/keithlamarcondemned. Check out our interview with Bomani about his book Condemned at our website. Bomani is set to be executed by the state of Ohio on Nov. 16, 2023.

Imam Siddique Abdullah Hasan is another Ohio prisoner facing the death penalty for helping resolve the 1993 Lucasville Uprising. You can hear our interviews with and about Hasan up at our website. Updates on Hasan can be found at LucasvilleAmnesty.org and more about the Free Ohio Movement is up at their website, FreeOhioMovement.org and also their fedbook under the username @FreeOhioMovement.

Matt Hinkston (A724969) is another prisoner that was on hunger strike with David Easley. Kristopher Chilton (A558673) is the an IWOC member that David mentions who's working on challenging adult sentencing of minors in OH. Kristopher and Matt are both at Toledo CI, same as David, so can be written there.

Central Ohio IWOC has been very helpful in supporting David and other prisoners through this. IWOC is a union of Incarcerated Workers and outside supporters, and their fedbook can be found under the username @OfficialCentralOhioIWOC. Their main site for IWOC is incarceratedworkers.org, where you can find tons of resources and updates on calling campaigns and ways to get involved.

https://perilouschronicle.com is a great, recently released tool for tracking prisoner resistance in the so-called U.S.

We found out a few days ago that Sean has been interstate transferred from Ohio to Virginia. While it’s nice that he’s closer to the radio show, it’s bound to be a very tumultuous move for Sean. VA has a different legal system in it’s prisons, Sean likely has none of the friends from his last 27 years inside the Ohio system present where he’s at, he’ll be facing a whole set of new challenges settling in. I don’t know anything about the specifics of his transfer but we hope to hear from him soon. Write him a letter at his new address (and new prisoner number) if you can:

And keep up on his case at https://SeanSwain.org

Update Required To play the media you will need to either update your browser to a recent version or update your Flash plugin.
Topic tags:
Activism, Civil Liberties, Civil Rights/Human Rights, Community Building, Disability, Health, Prison