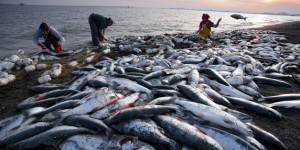 Part 1 of KBOO reporter Emily Gresham Beamer’s in-depth interview with Filmmaker Josh Tucker about the Pebble mine proposed in southwest Alaska, and his documentary ‘We can’t eat gold’.   The proposed open-pit gold mine, located in Alaska's Bristol Bay watershed, would be the largest of its kind in the world. The Bristol Bay watershed is home to the largest Sockeye Salmon run on earth. Tucker discussed the  'regulatory takeover' that has occurred in the mine's permitting process,  the ecological implications of the mine, and the massive indigenous resistance that followed its proposal.

Update Required To play the media you will need to either update your browser to a recent version or update your Flash plugin.
Download audio file
Topic tags:
Civil Rights/Human Rights, Activism, Environment/Climate, Indigenous, Evening News