"In the Company of Rebels": A Conversation with Chellis Glendinning 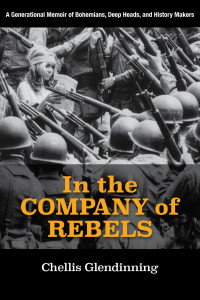 Her new book is a spirited, personal portrait of remarkable activists, artists, radicals, and thinkers who raised issues of justice, the environment, feminism, and colonialism

In the Company of Rebels: A Generational Memoir of Bohemians, Deep Heads, and History Makers, due out next month on New Village Press, is Chellis Glendinning's seventh book of non-fiction.

"American social change movements dominated the 1960s and 1970s, an era brought about and influenced not by a handful of celebrity activists but by people who cared. These history makers together transformed the political and spiritual landscape of America and laid the foundation for many of the social movements that exist today.
Through a series of 46 vignettes—tight biographical sketches of the characters and intimate memories of her personal encounters with them—the author creates a collective portrait of the rebels, whistleblowers, and dissidents who through word and action raised many of the issues
we are still grappling with.
"From Berkeley to Bolivia, from New York to New Mexico, a complex, multi-layered radical history unfolds through the stories and lives of the characters. From Marty Schiffenhauer, who fought through the first rent-control law in the United States, to Ponderosa Pine, who started the All-Species Parade and never wore shoes, to Dan and Patricia Ellsberg, who released the Pentagon Papers and became life-long anti-war and antinuclear activists, the portraits bring out some of the vibrant, irreverent energy, the unswerving commitment, and the passion for life of this generation of activists.
"In our present moment, as many people find themselves in the streets protesting for the first time in their lives, In the Company of Rebels makes connections to those who blazed insurgent trails just before them."

Glendinning also wrote Waking Up in the Nuclear Age. , When Technology Wounds., Off the Map: An Expedition Deep into Empire and the Global Economy, and My Name Is Chellis and I’m in Recovery from Western Civilization.  Glendinning was born just after World War II and came of age during the decolonization, liberation, and feminist movements. The central themes of her writings include the interlace of the personal with the political and a critique of mass technological society as contrasted by nature-based cultures. She has written nine books – including the latest: her first novel (and first in Spanish), Objetos, published by Editorial 3600 in La Paz, Bolivia, where she now lives.
Glendinning has also published hundreds of articles and essays in various journals, magazines, and newspapers. In the northern hemisphere these include Guernica, Orion, CounterPunch, Alternet, Santa Fe New Mexican, ColdType, San Francisco Bay Guardian, Salon, and Race, Poverty and the Environment. In Bolivia she has written for Los Tiempos, Le Monde Diplomatique, and Nueva Crónica. She also is Editor-on-the-Lam at the internet magazine Journal of Wild Culture. Check out her website here.

Update Required To play the media you will need to either update your browser to a recent version or update your Flash plugin.
Download audio file
Topic tags:
Activism, Arts/Culture, History