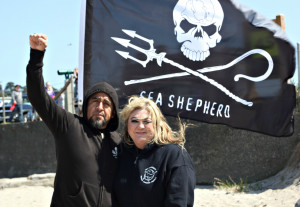 Activism to save the orcas

The world's ocean creatures are suffering from human exploitation and greed, and from the devastating effects of rampant ocean pollution and climate change. What can be done? In this episode of Voices for the Animals, host Courtney Scott interviews a passionate activist who is out on the front lines working to save orcas and all sea creatures from these perils. Michelle Seidelman is a volunteer at the international organization Sea Shepherd and with her husband Miguel recently founded Portland Sea Shepherd.

Michelle and her network of activists is currently focused on the orcas in the northwest,  a special species of orcas known as the southern resident killer whales. An orca mother in Puget Sound was seen for over 2 weeks carrying the body of her dead baby. The orcas and other sea life who depend on salmon for survival, are slowly starving to death. The solution Michelle says is for the four lower Snake River dams to be breached, which will allow salmon to migrate to cool water and spawn. To that end she urged  supporters to place calls to the Governor of Washington urging that action. The Governor's office reported that the phones have been flooded with calls, but Michelle urges supporters to keep the calls coming, as despite international media attention, interest wanes as time goes on. But Michelle is committed to weekly overpass banner drops to keep the orca's plight in front of the public.

We don't know yet what the result will be, whether the dams will be breached and the orcas saved. But you can be sure Michelle will be there on the front lines speaking out for these majestic animals.

Update Required To play the media you will need to either update your browser to a recent version or update your Flash plugin.
Download audio file
Topic tags:
Activism, Animals