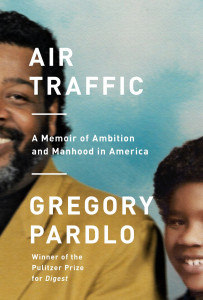 Gregory Pardlo's father was a brilliant and charismatic man--a leading labor organizer who presided over a happy suburban family of four. But when he loses his job following the famous air traffic controllers' strike of 1981, he succumbs to addiction and exhausts the family's money on more and more ostentatious whims. In the face of this troubling model and disillusioned presence in the household, young Gregory rebels. Struggling to distinguish himself on his own terms, he hustles off to Marine Corps boot camp. He moves across the world, returning to the United States only to take a job as a manager-cum-barfly at his family's jazz club.

Air Traffic follows Gregory as he builds a life that honors his history without allowing it to define his future. Slowly, he embraces the challenges of being a poet, a son, and a father as he enters recovery for alcoholism and tends to his family. In this memoir, written in lyrical and sparkling prose, Gregory tries to free himself from the overwhelming expectations of race and class, and from the tempting yet ruinous legacy of American masculinity.

Air Traffic is a richly realized, deeply felt ode to one man's remarkable father, to fatherhood, and to the frustrating yet redemptive ties of family. It is also a scrupulous, searing examination of how manhood can be fashioned in our cultural landscape.

from the New York Times:

As far as air traffic goes, the skies aren’t amiable — they’re at best benign, and are rendered so by watchful humans in towers. Greg Pardlo Sr. was once one such guardian, until President Ronald Reagan fired him and nearly 13,000 others for participating in the air traffic controllers’ strike of 1981.

His son Gregory Pardlo was 13 at the time, and takes up the subject in his dynamic new memoir, “Air Traffic: A Memoir of Ambition and Manhood in America.” Pardlo, a Pulitzer Prize-winning poet, writes, “It appeared to me then, and I know it to be true now, that the air traffic control strike was the defining moment in my father’s life. A pivotal point for me by proxy; the strike still shapes how I understand all that happened before and after it in my life.”

Pardlo, who admits to omitting the “Jr.” from his public persona “with what might be construed as a sort of patricidal malice,” divides his exploration into two parts. The first is largely a traditional memoir. In prose at once lucid, lyrical and rich in simile, Pardlo historicizes his grandfathers’ migration to the East Coast, his family’s middle-class life in suburban New Jersey, episodes of adolescent strife and his hasty enlistment in the Marine Corps Reserve.

In one memorable passage, Pardlo describes his father, then a member of his high school’s Black Student Union, bum-rushing a school board meeting and delivering a speech that enchanted a room of wary adults. The reception to his address ignited in the elder Pardlo the belief that he was special — and that little work was required to reap the yield of his gifts. (The tacit manifesto of the entire Pardlo clan, a telos that exacted high costs, seems to have been proving their “exceptionalism.”)

Update Required To play the media you will need to either update your browser to a recent version or update your Flash plugin.
Download audio file
Topic tags:
African American, Arts/Culture, Fiction, Family, Government/Politics, History, Transportation