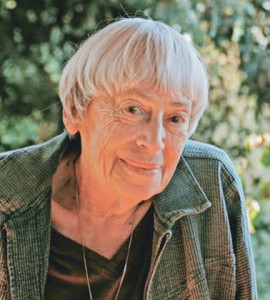 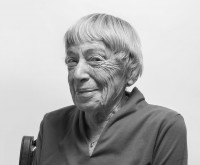 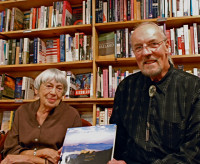 "Women's writing tends to get disapeared when they die..." -Ursula K. Le Guin

Portland's own Ursula K. Le Guin passed away this week at the age of 88. She was a novelist working mainly in the genres of fantasy and science fiction but she also authored children's books, short stories, poetry, and essays. Her writing was first published in the 1960s and often depicted futuristic or imaginary alternative worlds in politics, the natural environment, gender, religion, sexuality, and ethnography. In 2016, The New York Times described her as "America's greatest living science fiction writer", although she said that she would prefer to be known as an "American novelist".

From the New York Times:

Ms. Le Guin embraced the standard themes of her chosen genres: sorcery and dragons, spaceships and planetary conflict. But even when her protagonists are male, they avoid the macho posturing of so many science fiction and fantasy heroes. The conflicts they face are typically rooted in a clash of cultures and resolved more by conciliation and self-sacrifice than by swordplay or space battles.

Her books have been translated into more than 40 languages and have sold millions of copies worldwide. Several, including “The Left Hand of Darkness” — set on a planet where the customary gender distinctions do not apply — have been in print for almost 50 years. The critic Harold Bloom lauded Ms. Le Guin as “a superbly imaginative creator and major stylist” who “has raised fantasy into high literature for our time.”

How do you interview someone you've admired for decades? Producer Dmae Roberts found out in 2010 when she got to interview legendary author Ursula K. Le Guin for the second time. The author of more than 40 books, Le Guin is a much gifted and prolific writer much loved by fans around the world. And in this half hour Oregon Treasures special, Le Guin shares thoughts about her work and the Oregon landscapes that have inspired her.

Best known for her literary science fiction and fantasy books, Le Guin crosses all genres. At the time of this documentary special, she published a book of poetry and drawings with photographs by Roger Dorband. Roberts visited with Le Guin in her home to talk about her works and career.

Dmae also attended a book party for "Out Here" at the Looking Glass books. Le Guin said it was her very first book launch she's ever had.

Oregon Treasures was a special series with funding by the Regional Arts and Culture Council.

Music by longtime Le Guin collaborating partner - Todd Barton. This year long series was produced by Dmae Roberts brings to light veteran arts organizations and artists who have made an impact for several decades on the artistic landscape of Oregon.

You can hear Stage & Studio at the KBOO website or on 90.7FM live at 11am Tuesdays.

Or you can subscribe to the podcast on iTunes so you don't have to miss a show.
And don't forget to check out stagenstudio.com.

Update Required To play the media you will need to either update your browser to a recent version or update your Flash plugin.
Download audio file
Topic tags:
Arts/Culture, Elders, Fiction, History, Media, Music, Science/Technology, Women
Genre(s):
Arts and Culture