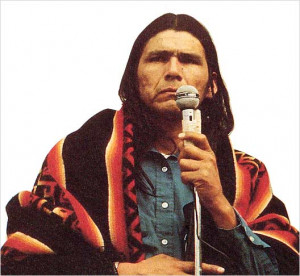 Dennis Banks left on his final Journey
Dennis Banks is remembered for having organized, with AIM in a coalition of 8 indigenous nations, the 1972 Trail of Broken Treaties. They converged on Washington, DC, with 500 followers to protest Indian living conditions and lost treaty rights. They occupied the Bureau of Indian Affairs for nearly a week, reading and confiscating documents that were later turned over to the UN (in 1977). There they formed the basis for the 2007 UN Declaration on the Rights of Indigenous Peoples.
In 1973, Dennis Banks participated in the occupation of Wounded Knee and in 1978 he was part of a group that initiated The Longest Walk a traditional and spiritual journey from Alcatraz in San Francisco to Washington DC. Aspects of the longest walk are still celebrated every year.
In February of 2006 I met Dennis Banks at a screening of the film: Alcatraz is not an Island at the Roxie in San Francisco. It's a documentary on the 18 months Native American occupation of Alcatraz Island that began in November 1969.
Dennis Banks was in San Francisco preparing for the sunrise ceremony on Alcatraz to mark the beginning of the 2006 Longest Walk. I'm grateful that Dennis Banks allowed me to record him in February 2006. And I hope that his understanding of walking and journey taking has meaning for you listening today - now that Dennis Banks has begun his own journey into the spirit world.

Roxanne Dunbar Ortiz on the Doctrine of Discovery

In 1455 Pope Nicholas V issued to the King of Portugal the bull Romanus Pontifex, sanctioning and promoting the conquest, colonization, and exploitation of non-Christian nations and their territories. This became the Doctrine of Discovery that is amazingly still enforced today and enshrined in US Federal law. Roxanne Dunbar Ortiz explains the doctrine in this Part One of Three programs. This program is based on a talk she gave at the Lannan Foundation.
The Lannan Foundation in Santa Fe, apart from awarding grants, presents speakers of extraordinary intellect and passion - among them just in 2017 Terry Tempest Williams, Glen Geenwald, Arundhati Roy, "scar Martnez and Marlon James. Roxanne Dunbar Ortiz spoke on October 11, 2017. You may remember her from a TUC Radio program on the release of her ground breaking book: An Indigenous Peoples' History of the United States.
She was introduced by Nick Estes. He is member of the Lower Brule Sioux Tribe in South Dakota, and historian and doctoral candidate in American Studies at the University of New Mexico.
Roxanne Dunbar Ortiz has been part of the international Indigenous movement for more than four decades, working on sovereignty and land rights. She is Professor Emerita of Ethnic Studies at California State University, East Bay.