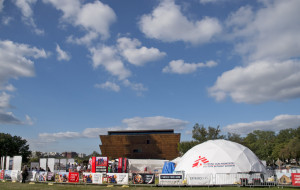 Starting today and running through October 22, the international medical aid group Medicins Sans Frontieres/Doctors Without Borders (MSF) will be holding a free, interactive outdoor exhibition in Pioneer Courthouse Square called "Forced from Home," which invites you to see what aid workers see when they work with commuinities of refugees on the move.

MSF is one of a few international NGO's that provide vital medical services to refugees and displaced people. Currently, around 65 million people worldwide are displaced from their homes by conflict, poverty, government repression and environmental disasters. "Forced from Home" aims to connect you with these people, their stories, the things they carry and leave behind, and the aid workers who try to facilitate their passage in the face of disease, malnourishment, hostile governments, poor travel conditions, and predatory smugglers.

To hear more from the people putting this exhibition together, KBOO Thursday Evening News anchors Tom Flynn and GraceAnn Smith spoke to Ebam Eyang Ebam, an emergency medical doctor who has worked with MSF in northeastern Nigeria for four years, and Leah Battersby, an MSF logistician who has completed four missions with the organization to Tanzania, Tajikistan, Sierra Leone, and Myanmar. Both will be preseters at the "Forced from Home" exhibition.