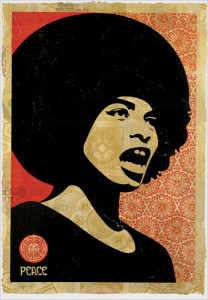 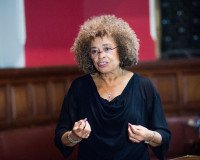 From the FBI's Ten Most Wanted list to being Distinguished Professor Emerita of History of Consciousness and Feminist Studies at University of California Santa Cruz, Angela Davis has remained a committed and eloquent force for communities of struggle.  Angela Davis works to end slavery culture and its legacy. Books include Abolition Democracy; Are Prisons Obsolete?; Narrative of the Life of Frederick Douglass; and essays on The Meaning of Freedom.

Angela Davis's talk to the Birkbeck School of Law, University of London, "Freedom Is a Constant Struggle: Closures and Continuities." The speech includes discussion of the erasure of women and collective action from the generally accepted history of the black liberation struggle,insights about the Emancipation Proclamation, about the Black Panther movement, and about the role of terrorism in American history.