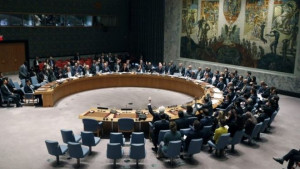 In spite of North Korean threats to make the U.S. pay a heavy price, the UN Security Council unanimously passed today a resolution imposing sanctions against North Korea. This resolution was prompted when North Korea expanded and tested their ballistic nuclear missile program. It is a watered-down version of the original sanctions proposal from the United States. Demands to ban oil imports to North Korea and freezing international assets of its government and of Kim Jong Un were dropped from the resolution. It also dropped a U.S. proposal to allow interception, boarding and inspection of ships which were known to violate previous UN sanctions. Today though, the resolutions imposes a ban on North Korea's textile imports, caps crude oil exports at current levels and steps up restrictions over employment of foreign North Korean workers.

Multnomah County officials said Sunday that the slightly wetter weather and restrained winds have helped slow the now 33,000-acre Eagle Creek fire. The blaze is now about 7 percent contained but there is no exact time on when residents of the area may return. It is only expected to be fully contained around September 30th. Conditions are expected to dry out and become more volatile through Tuesday, but winds are not expected to be as forceful. A community meeting on the fire takes places Monday night at 6pm at the McMenamins Edgefield Ampthitheatre in Troutdale.

Irma is expected to keep losing force as it moves inland, and it could become a tropical depression by Tuesday afternoon. The storm as of now has a very wide reach, with some winds reaching more than 400 miles north. Though Atlanta is far from any coast or where Irma first made landfall, it was still placed under tropical-storm warning. Delta Airlines has canceled nearly 800 flights into Atlanta in anticipation of the strong crosswinds which could cause problems throughout the nation's air travel system. The National Weather Service forecast shows the center of Irma heading southwest possibly reaching Georgia tonight and moving into Alabama Tuesday.