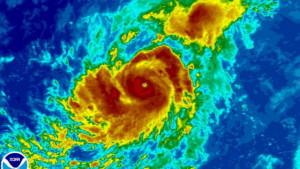 Hurricane Irma blasted through the Caribbean on Thursday killing 10 people and creating near-total destruction on the islands. Barbuda and Antigua were hit especially badly. A chairwoman of the Barbuda council stated that cars were flying over people's heads and 40 foot containers were flying everywhere. People were tying themselves to their roofs. Barely anything in Barbuda was left untouched. Irma destroyed so many structures and homes that it left more than half of Barbuda homeless. Storm shelters were also mostly overwhelmed. Some say that this storm serves as a warning to those that are soon going to encounter Irma on its way northwest.

Betsy DeVos is seeking to roll back portions of Title Nine. This title is a part of the Education Act Amendment of 1972 that ensures that no person in a federally funded program (like a school for example) will be discriminated against for gender. If an organization or intitution were to display bias towards gender, it can have funds withheld. DeVos has plans to review and possibly reconstruct the sections that deal with sexual assault on campuses because she believes that it mostly favors the victims of sexual assault and overly punishes the accused. DeVos stated that, "The truth is that the system established by the prior administration has failed too many students. Survivors, victims of a lack of due process and campus administrators have all told me that the current approach does a disservice to everyone involved."

The Oregon Department of Transportation has recently proposed a 450 million dollar expansion of Interstate 5 to go through the heart of Portland. They would add lanes and shoulders to reduce crashes and congestion. However a few hundred people and several groups have already asked the city to deny the proposal and drop its support saying that the project would only be a temporary solution. They also say that it would prompt more Portlanders to drive. The state transportation department says that the expansion would save 6.5 minutes during the morning commute, and 8 minutes of evening driving. Opponents think that this is 'too optimistic' a statistic and say that the department should first add tolling along the corridor and Portland, which would automatically make people want to reduce their trips.