Trump Suggests Police Can Be More Rough on Suspects 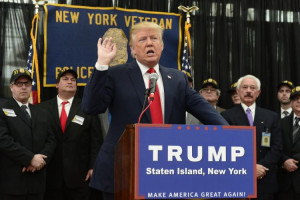 On Saturday, Portland police released a statement stating "our officers are expected to treat everyone with respect even if they are a suspect."  This comes in response to President Trump's suggestions to New York police on Friday that they do not have to remain respectful to suspects.  Trump's comments come during a climate of distrust between the police and communities.  Communications director for the ACLU of Oregon, Sarah Armstrong, relays the higher risks that people of color face as they are already apprehended and imprisoned at a much higher rate.  Armstrong explains how these suggestions violate the "innocent until proven guilty" principle in our criminal justice system. Those defending the president's comments say "he was only joking."

The heat wave issued yesterday is still going strong, with record high temperatures expected this week. Be sure to check up on elderly friends or family members you may have as well as any pets to ensure that they're being hydrated.  Portland Fire and Rescue has released warnings as well to never leave a child, elderly, or animal in a parked car, stay out of the sun, and to always wear sunscreen.  Multnomah County has opened up three cooling stations that are located at Multnomah County Walnut Park Building, 5325 N.E. Martin Luther King Jr. Blvd., Portland, Multnomah County East Building, 600 N.E. 8th St., Gresham, and Hollywood Senior Center, 1820 N.E. 40th Ave., Portland. If you need a ride to one of these locations you can call 503-226-0700 to arrange for a free ride.  For other tips and information you can call The Multnomah County Aging and Disability Services Helpline at 503 988-3646 or Portland fire and rescue at 503-823-3700.

For the second time in a year, the lower house of Congress has voted on whether or not to impeach the president of Brazil.  This vote to impeach the president based on corruption charges is set to take place on Wednesday.  This vote will require 2/3 of Congress' approval for it to pass.  If there are enough votes for impeachment, president Temer will be facing a 180 day suspension and will face trial.  This comes after accusations against Temer of receiving 12 million dollars in bribes after intervening in a business deal.