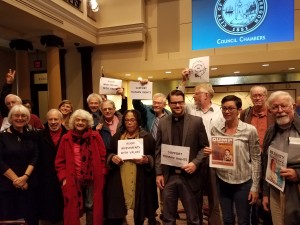 The Portland city council chambers were packed to capacity yesterday afternoon, with many people sent to an overflow room to watch the proceedings on video. The reason? A hearing on the “do not buy list” recommendations from the city’s socially responsible investment committee.

The council established social and values criteria for the City's investments back in 2013, with Walmart being the first company on the list. Later, a number of fossil fuel companies were added to the list.

Yesterday, the committee recommended the addition of ten companies – including Wells Fargo, Nestle and Caterpillar. Here’s a representative of the committee

The inclusion of Caterpillar led to a lot of testimony about the Israeli occupation of Palestine, where Israeli armored bulldozers are used by the Israeli military to build the Wall and destroy Palestinian homes.

But this was not the only reason Caterpillar was included on the list.

Several people argued that even though Caterpillar has engaged in numerous abusive practices, they should be excluded from the ‘do not buy list’ because some of those abuses are against Palestinians.

Commissioner Steve Novick, at the beginning of the hearing, seemed enamored by this argument – saying that he didn’t intend, when he called for a ‘do not buy list’, for it to apply to human rights violations against Palestinians.

Several people pointed out that Caterpillar violates six of the seven principles laid out by the committee – and that it is, in fact, one of the ‘worst of the worst’.

The city council accepted the report from the committee, and will vote in two weeks on the recommendations to add ten companies, including Caterpillar, to the city’s ‘Do not Buy’ list.

Update Required To play the media you will need to either update your browser to a recent version or update your Flash plugin.
Download audio file
Topic tags:
Civil Rights/Human Rights, Corporations, War/Peace

END_OF_DOCUMENT_TOKEN_TO_BE_REPLACED

Wednesday Talk Radio
Resistance to Lithium mine in Nevada builds