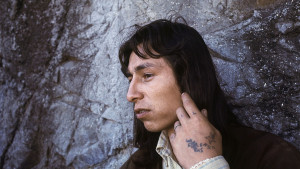 First Voices Radio digs deep into our 30-year-old archive and brings listeners another interpretation and observation surrounding the American holiday known as Thanksgiving.

The late John Trudell's Thanksgiving Day Address is from 1980, however his observations have stood the test of time and still ring true.

The names of U.S. politicians that Trudell mentions have changed over the years but the issues that Native peoples faced then and now remain the same.

John Trudell (1946-2015) has been identified as a poet, a fighter for Native American rights, an agitator, and many other things. But if you were to have asked him which of these descriptions best suits him, he would have refused to be pinned down. "Actually I don't consider myself to be any of those things. They're things that I do but they are parts of me. They are not the total."

Indeed, Trudell was the complex sum of all that he saw, endured and accomplished during his 69 years, a time when he experienced more than most people might in several lifetimes.

More information about John Trudell can be found at https://www.johntrudell.com/

Update Required To play the media you will need to either update your browser to a recent version or update your Flash plugin.
Download audio file
Topic tags:
Activism, Indigenous