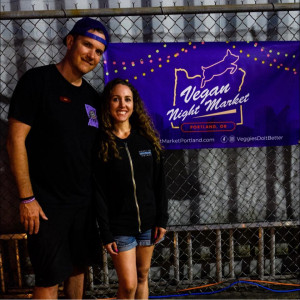 "That Vegan Show" celebrates one year on KBOO fm! "That Vegan Show" started in 2015 on The U Radio (housed at University of Missouri, St Louis). A not fully formed idea of hosting a vegan talk show had been floating around in my head for some time. After starting and hosting a music radio show at The U in 2013 - 2014, the concept solidified and I launched "That Vegan Show" in February of 2015 - June 2016 (with a follow up show in summer 2017). After moving to Portland in the Fall of 2016, I had planned on bringing my show to the airwaves here. I finally realized that dream when I applied to KBOO in the summer of 2021 and then had the first show on Oct 22, 2021.

It is fitting that Chelsea Davis is part of this special 1 year milestone. Prior to moving to Portland, I contacted NW Veg, seeking someone to interview during a remote show I was planning durng my first visit to PDX in 2015. Chelsea responded right away and agreed to be the guest on the show. She came to my AirBNB bearing vegan gifts for myself and my son. We had a great interview that broadcast back to St. Louis. Chelsea returned as a guest a second time on my St. Louis show and even helped me to find a place to live when I was moving to Portland. When it came time to develop a sample interview for the KBOO application, she was there for me and the show again. She was the first guest on the KBOO show and now is back to tell us about all of the upcoming vegan events and projects that she is working toward, including collaborating with a St. Louis based animal activist organization, Project Animal Freedom!

Chelsea Davis is the founder of Veggies Do It Better, Vegan Night Market Portland (and soon Seattle!), co-founder of Animal Rights Collective Portland (ARCPDX), and is an international coordinator for next year's Vegan Climate March. During the episode, we share about upcoming events including the Vegan Night Market at The Redd (Oct 30), ARCPDX monthly meeting with guest speaker, author Mark Bekoff (Nov 2), Human Meat Tray demo (Oct 29), and Fur Free Friday (now on Sat, Nov 26). Chelsea also gets the word out about the FDA modernization Act in the Vegan News segment.

Update Required To play the media you will need to either update your browser to a recent version or update your Flash plugin.
Download audio file
Topic tags:
Activism, Animals, Environment/Climate, Food, Global Affairs, Legislation