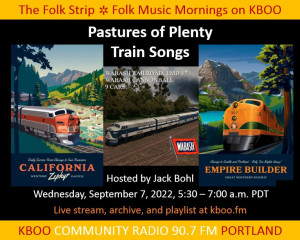 The glamour of luxury trains of the past, trains that took loved ones away or brought them home, and the siren call of the lonesome train whistle have been the subject of hundreds of classic American folk, country and blues songs since the heyday of railroads from the 1930s through the 1960s.

In this episode of Pastures of Plenty we’ll hear some of the greatest songs recorded about trains, from the 1920s through the 21st Century, by familiar voices of the past and present.