After Cheney’s Primary Loss: Why Is Trump's Hold On Republican Voters So Strong? 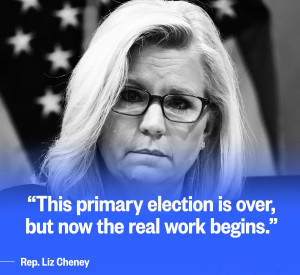 After Tuesday's blowout, Rep. Liz Cheney (R-WY) has come out still fighting Trump and rebadged her campaign page under the tagline of "The Great Task," quoting from Lincoln's Gettysburg Address:

"It is rather for us to be here dedicated to the great task remaining before us . . . that we here highly resolve that these dead shall not have died in vain—that this nation, under God, shall have a new birth of freedom, and that government of the people, by the people, for the people, shall not perish from the earth."

Yet, the prospects for her fight to win back the Republican base looks bleak. And with her 93% voting record with former Pres. Trump, many are laying the blame at the present state of far-right extremism of white Republican voters at the feet of Republicans like Cheney and before her, her father, former Vice President Dick Cheney.

In this episode of AMERICAN STANDOFF, host Jacqueline Keeler will examine the origins of this white American extremism and whether it is really out of character.

Update Required To play the media you will need to either update your browser to a recent version or update your Flash plugin.
Download audio file
Topic tags:
Indigenous, Government/Politics, Elections, Civil Rights/Human Rights