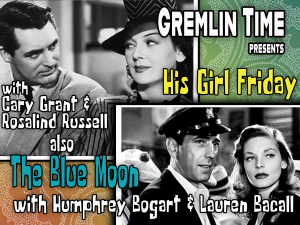 An all-star line up tonight on the bedtime radio show for grown-ups. First, Cary Grant and Rosalind Russell recreating their film roles  from the 1940 Howard Hawks comedy His Girl Friday. Ace reporter Hildy Johnson, Russell, wants to quit the newspaper business and get married to a nice man from Albany. But her editor, and ex husband Walter Burns, Grant, has other ideas, especially when he needs a top reporter in a hurry to cover a breaking story that could bring down a corrupt city government. Based on the hit stage play The Front Page by Ben Hecht & Charles MacArthur.

Also, an episode of the classic radio series Bold Venture, starring Humphrey Bogart as Slate Shannon and Lauren Bacall as Sailor Duval. A wealthy plantation owner hires Shannon to rescue his daughter from the blackmailing owner of a gambling ship, The Blue Moon, anchored off Havana, Cuba.

Update Required To play the media you will need to either update your browser to a recent version or update your Flash plugin.
Topic tags:
Arts/Culture, Fiction, Radio Theater
Genre(s):
Arts and Culture, Radio Theatre