West Virginia v. EPA and the Rest of Us 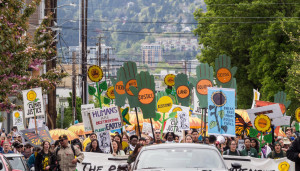 This summer the U.S. Supreme court decided a trifecta of scary rulings on abortion, gun rights and environmental protection. So far, the repeal of Roe v. Wade has drawn the most attention but the other two rulings are equally concerning.

On this episode of Locus Focus we talk with Lauren Goldberg, executive director of Columbia Riverkeeper, about the court’s decision on West Virginia versus the EPA, a ruling that limits the EPA’s ability to regulate carbon emissions in the power sector, and we’ll discuss how it affects climate action here in the Northwest.

Learn more about stopping the expansion of the GTN Xpress Pipeline, which Lauren talks about on this show.

Update Required To play the media you will need to either update your browser to a recent version or update your Flash plugin.
Download audio file
Topic tags:
Activism, Energy/Natural Resources, Environment/Climate, Government/Politics, Law/Court/Crime