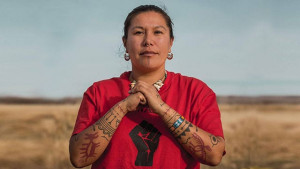 With the Pope's recent visit again shining the spotlight on Canada's shameful treatment of its indigenous colonial subjects, including the abuse and murder or death by neglect of children stolen from their Native families and communities, we spend the hour with Indigenous warrior Kanahus Freedom Manuel

Manuel  is a member of the Neskonlith band in British Columbia. She was born  into a highly political family, the daughter of Beverly and Arthur Manuel. Her father was the son of Marceline Paul of the Ktunaxa Nation and political leader George Manuel of the Secwepemc Nation and grew up on the Neskonlith Reserve in the interior of British Columbia. George Manuel served as president of the National Indian Brotherhood and of the World Council of Indigenous Peoples in the 1970s, Arthur was born into the struggle along with other activist family members. In the 1970s, he served as president of the national Native Youth Associationn activist.

Kanahus is a birth keeper and a member of the activist group Tiny House Warriors. She refused to register her four children with the government as a way to protest Canadian federal and provincial government regulation. She also used it as a statement of decolonisation, to stress her children's status as First Nations members. She also works to revive raditional traditional First Nations tattooing, with face tattoos a priority.

Manuel is well known for her activism against corporate development projects in her home territory, including the Sun Peaks Resort and Imperial Metals, and she protested and drew attention to the massive Mount Polley toxic mine spill. Imperial Metals named her among others in gaining a court injunction against them to stop their blockades of the company's development.[8]

Beginning in 2017, Manuel was part of the Tiny House Warriors movement to construct ten tiny houses to be placed in the path of the Trans Mountain pipeline. This action was a way of asserting control over the traditional Secwepemc territory, where the company proposed building part of the pipeline. On July 15, 2018 Manuel was arrested by the RCMP for her participation in the Tiny House Warrior resistance.

Manuel is the radio host and producer of Creating A Culture of Resistance, a show on Wolf Paw Radio that interviews activists from different cultures.

In October 2019, Manuel was arrested by the RCMP as part of a Tiny House Warrior protest against the Trans Mountain pipeline. Currently, she is organizing with Indigenous fishermen on the coast to fight supertankers destined for  Washington, Oregon and California.

Update Required To play the media you will need to either update your browser to a recent version or update your Flash plugin.
Download audio file
Topic tags:
Activism, Movement for Racial Justice, Civil Rights/Human Rights, Energy/Natural Resources, Environment/Climate, Indigenous