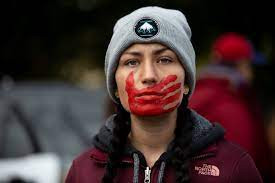 "An Oath to Uphold: A Warcry": In the first of a six-part series, Nimiipuu/Nez Perce Mole Julian Ankney interviews Nimiipuu MMIP (Missing and Murdered Indigenous Peoples) activist Channa Henry, a rape survivor and former police officer on the reservation, about how acts of violence go unanswered in reservation communities; on misconduct and police corruption and their connection to murdered and missing Indigenous people and the cases that are not even investigated.