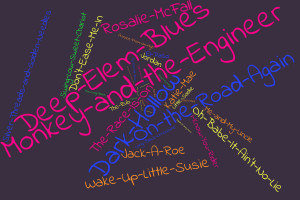 Closing out yet another 'covers project' special.

What started out casually over a decade ago, has gradually turned into a seemingly endless stream of broadcasts exploring songs performed by the Grateful Dead (& Jerry Garcia), but written by people outside the band.

This latest special focused on songs performed (not just) acoustically by The Grateful Dead.  Launched in 2020 and continued in 2021, it's now time to put this one to bed.  In this finale, you'll hear performances from John Lee Hooker, James 'Sugar Boy' Crawford, Marty Robbins, Charlie Monroe, Merle Haggard, John Dilleshaw, Vern Stovall, the Fisk Jubilee Singers and more.

Recall that "[t]he Dead had their origins in acoustic music," says this comprehensive look at the band's early acoustic sets, "Back in '61 Phil Lesh was impressed enough by Garcia as a folk-singer to get him his own radio show - and Garcia, Weir, and Pigpen first started playing together in the Mother McCree's jug-band in '64, after Garcia had tired of the local bluegrass circuit. If it hadn't been for their love of the Beatles and the Stones, perhaps they would have become a merry band of old-time traditionalists like the New Lost City Ramblers."

To acknowledge some of the artists who contributed to the band's love of acoustic music, I've compiled a list of all songs The Grateful Dead covered acoustically. I've located the original recording of each; first I'll play that and then a carefully selected GD acoustic cover (when a choice was possible).

One major distinction this special has from the other parts of the trilogy is that it only includes 44 songs from 26 shows spread across only three years (1969, 1970, 1980). A key trait this special shares with its predecessors is that the original artists featured range from the commonly known (John Lee Hooker, Lightnin’ Hopkins, Judy Collins, Merle Haggard and The Everly Brothers) to the much more obscure (Furry Lewis, Maddox Brothers & Rose, John Dilleshaw and the Fisk Jubilee Singers).

Update Required To play the media you will need to either update your browser to a recent version or update your Flash plugin.
Download audio file
Genre(s):
80's, Afro-Caribbean, Bluegrass, Blues, Country, Eclectic, Folk, Live Performance

Jazz in the Afternoon
The Long Cuts

Drinking from Puddles
Drinking From Puddles for 08/17/2022

END_OF_DOCUMENT_TOKEN_TO_BE_REPLACED

Roe on the Rocks
Barriers in Tennessee

Drinking from Puddles
Drinking From Puddles for 08/17/2022

Free Culture Radio
An Interesting Time To Be Alive

Rural Roots Rising
Anyone Can Be An Organizer