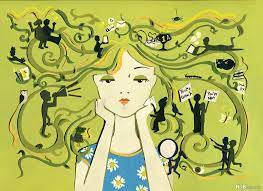 Patricia Kullberg hosts this episode of the Old Mole, which includes the following segments:

Teen Mental Health: Is there a Teen mental Health Crisis as alleged by the New York Times? The Times’s series of articles, the first titled "It's Life or Death: The Mental Health Crisis Among U.S. Teens," has been picked up by many other newspapers and been featured on television. Bill Resnick talks to his Old Mole comrade, Jan Haaken, a psychologist and for many years the director of the Portland State University Psychology Department's counselling unit. Jan's three books include "Psychology, Politics, and PTSD.” She counters the Times’s story, contending that teens are doing better than ever on many measures, that suicides are not increasing, and the actual troubles for teens are rooted in the in the world created by our current social and political arrangements, that create precarious lives and the grave threat of climate collapse. These have aggravated teen difficulties that the teens themselves are seeking to deal with.

Lessons in Chemistry: Sometimes, though not often, Book Mole Larry Bowlden reads a book simply for the joy of it. Lessons in Chemistry, by Bonnie Garnus, is such a joy to read. But the 2022 novel also has lots to say about women in the sciences and the ways in which they are forced to work in the shadows of men who all too often take credit for the work the women do.

Organizing Collective Power for Public Good, Part 3: Joe Clement continues their conversation with Emily Drabinski, President-elect of the American Library Association. In an election that saw more votes cast than any other in the ALA's history, Emily won on a campaign of organizing for collective power for public good. In this last part of their inteview, they consider how libraries could fit into a Green New Deal and the challenge of changing capitalist norms that have crept into libraries. Part 1 and Part 2 aired respectively on May 9 and May 16.

A Message for China: Why has the U.S. withdrawn its proposal for a negotiated settlement to the Ukraine war? What does the U.S. have to gain from an already defeated and weakened Russia? Why is the U.S. risking nuclear war?  Bill Resnick has a plausible answer: That U.S. political and military elites are sending a lesson to China: Don’t pick fights with the U.S. But it’s too late for that. China has become the second most powerful country in the world and is growing fast, much faster than the U.S. Bill Resnick, our Well Read Red, reads and comments on a New York Times Op-Ed, “America and Its Allies Want to Bleed Russia,” published May 11, 2022.