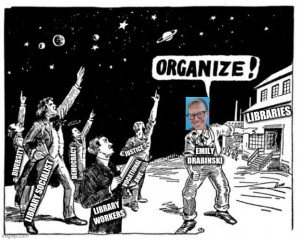 Joe Clement continues their conversation with Emily Drabinski, President-elect of the American Library Association. In an election that saw more votes cast than any other in the ALA's history, Emily won on a campaign of organizing for collective power for public good. In this last part of their inteview, they consider how libraries could fit into a Green New Deal and the challenge of changing capitalist norms that have crept into libraries. Part 1 and Part 2 aired respectively on May 9 and May 16.

Update Required To play the media you will need to either update your browser to a recent version or update your Flash plugin.
Download audio file
Topic tags:
Activism, Arts/Culture, Environment/Climate