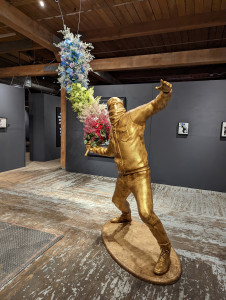 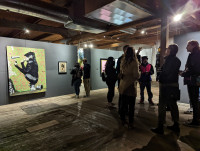 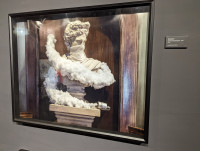 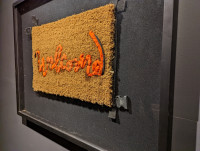 Elle Miller on Banksyland, a show of the work of British street artist Banksy

On Tuesday, April 26, 2022, Joseph Gallivan interviews Elle Miller about Banksyland, a show of the work of British street artist Banksy. Miller talks about her love of Banksy’s stencil art and installations, his slogans and sayings, and the idea of appropriating his work for an unauthorized exhibition.

This interview was recorded on a Zoom H2N mobile recorder on April 20, 2022.

From the press release:

Perhaps the world’s most intriguing living artist, Banksy’s identity remains unknown. He is understood to have been born in Bristol, England in the mid 1970s. Emerging from Bristol’s graffiti and street art scene of the 90s, Bansky reached world wide acclaim, and infamy in the following decade after several high profile conceptual stunts, including the illegal placement of subversive pieces inside the art world’s most hallowed galleries, and perhaps his most famous prank; when Bansky installed an automatic shredder inside the frame of his iconic Balloon Girl painting, causing the the piece to self destruct upon its sale at auction.

Banksy’s most recognizable works are stenciled graffitis that combine mundane imagery juxtaposed with unexpected objects and slogans. Sometimes cynical, sometimes hopeful, Banksy’s work is decidedly political, taking aim at militarism, consumerism, capitalism, and greed. His iconic stencil pieces depicting rats, apes, and policemen have been spotted throughout the globe, drawing widespread attention wherever they appear. Banksy’s conceptual works and installations too, such as his dystopian theme park Dysmaland, or his Walled Off Hotel in Bethlehem, have provoked controversy and stimulated heated debate not only in the art world, but society at large.

KBOO Radio is a volunteer-run nonprofit and it needs your money if you are listening.

Joseph Gallivan has been a reporter since 1990. He has covered music for the London Independent, Technology for the New York Post, and arts and culture for the Portland Tribune, where he is currently a Feature Writer. He is the author of two novels, "Oi, Ref!" and "England All Over" which are available on Amazon.com