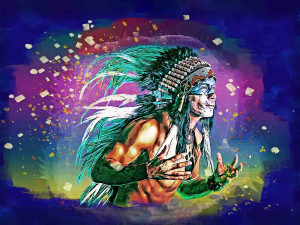 This Friday, April 22nd is Earth Day, a day of global action which began in 1970 with the emerging environmental movement. The official theme for Earth Day this year is "Invest in the Planet," a phrase that evokes some of the corporate interests that do approach the planet through the lens of their investment portfolios. Alongside the greenwashing and corporatizing of Earth Day, the climate movement has grown to include radical demands and challenges to corporate destruction of the environment. In reclaiming Earth Day, Jan Haaken talks with Grace Dillon, Professor of Indigenous Nations Studies at Portland State University, about Indigenous visions of Earth Day, climate justice and the role of Indigenous Futurisms and Native storytelling in imagining that a better world is indeed both necessary and possible.

Time Travels Through Us: Photograph by Canadian Native artist Shelley Niro, courtesy of the National Gallery of Canada.

Update Required To play the media you will need to either update your browser to a recent version or update your Flash plugin.
Download audio file
Topic tags:
Activism, Arts/Culture, Environment/Climate, Indigenous