Labor and the Environment 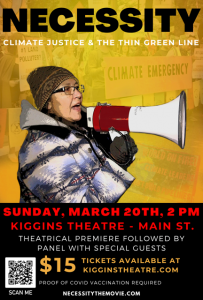 On Sunday, March 20th, the locally produced documentary, "Necessity: Climate Justice & the Thin Green Line" will have its theatrical premiere at Kiggins Theatre in downtown Vancouver, Washington. This is the second film in a two-part series on climate activism directed by Jan Haaken, filmmaker (and Old Mole), along with co-director Samantha Praus.

Much like Part I, "Necessity: Climate Justice & the thin Green Line" is guided by Native perspectives and weaves into the film dramatic regional sites where people are fighting fossil fuels. The film continues the story of activists enlisting the necessity defense, this time in a precedent-setting jury trial in Oregon after a direct action at Zenith Energy in Portland. This story of climate resistance in the Pacific Northwest brings into view a historical landscape of tribal leaders, Indigenous activists and white allies as they resist oil trains and terminals in the transport of highly toxic products through critical waterways and treaty lands.

The story that unfolds in the film includes community opposition to the Tesoro-Savage Terminal at the Port of Vancouver. Jan Haaken talks today with Cager Clabaugh, former President of the International Longshore & Warehouse Workers Union (ILWU) Local 4 about the successful fight in Vancouver against what would have been the largest oil-by-rail terminal in North America. Cager Clabaugh is featured in the Necessity film and will be joining other activists featured in the film at the Kiggins screening on March 20th. Cager talks with Jan today about the history of the fight against Tesoro-Savage and the importance of labor and environmental alliances in responding to the climate crisis.

Update Required To play the media you will need to either update your browser to a recent version or update your Flash plugin.
Download audio file
Topic tags:
Activism, Movement for Racial Justice, Corporations, Energy/Natural Resources, Environment/Climate, Indigenous, Law/Court/Crime