Celilo Falls: Past, Present and Future 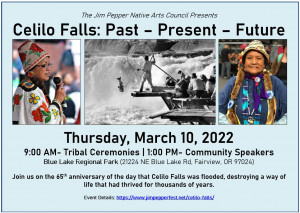 On March 10, 1957, The Dalles Dam flooded Celilo Falls, for at least 11,000 years the most important salmon fishery and trading center for Indigenous people of the Columbia River basin and the greater Pacific Northwest.

An event to commemorate that fateful day 65 years ago is being held at Blue Lake Park in Fairview, just east of Portland. It begins at 9 a.m., with a salmon bake at noon and a speaker program at 1 p.m., featuring Navajo/Warm Springs/Wasco/Yakama poet Elizabeth Woody as keynote.

On today's show will be the organizers of the event. Aurolyn Stwyer is a member of the Confederated Tribes of the Warm Springs, with Celilo and Wasco ancestry. She studied for her Ph.D and was a Professor at the Heritage University at Toppenish, WA School of Business. She owns and runsthe Red Skye Trading Post in Warm Springs and is a master beadwork artist, who has Received two National awards from the Native Arts and Culture Foundation and the Burke Museum, Bill Holm Center.

Sean Cruz is founders and  Executive Director of the Jim Pepper Native Arts Council, which is sponsoring the Celilo Event and which organizes an annual music festival honoring the great Native American musician. He served as Oregon State Senator Avel Louise Gordly’s legislative staff for six years until her retirement in 2008. The seeds for his organization and this event were sown in Senator Gordly’s office during that time.

Elders and chiefs regulated the fishing, permitting none until after the First Salmon ceremony. Each day, fishing started and ended at the sound of a whistle. There was no night fishing. And when a fisher was pulled into the water – most who fell perished in the roiling water – all fishing ceased for the day. In later years, each fisher was required to tie a rope around his waist, with the other end fastened to the shore. Elders and others without family members able to fish could take what they needed from the catches. Visiting tribes were given what they could transport to their homes. The rest belonged to the fishers and their families.

All this changed on the morning of March 10, 1957, when the massive steel and concrete gates of The Dalles Dam closed and choked back the downstream surge of the Columbia River. Four and a half hours later and eight miles upstream, Celilo Falls, the spectacular natural wonder and the age-old Indian salmon fishery associated with it was under water.

Update Required To play the media you will need to either update your browser to a recent version or update your Flash plugin.
Download audio file
Topic tags:
Energy/Natural Resources, Environment/Climate, Government/Politics, History, Indigenous