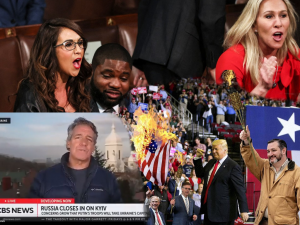 In this episode of AMERICAN STANDOFF, we'll take a look at the way colonial white supremacy shapes not only elections and compassion here in the United States but abroad as well, even as we face the threat of World War III.

As the world watches in horror at the unprovoked invasion of Ukraine, correspondents from Western media outlets have expressed shock at the images of Ukrainian victims of war because they seem more "European," and are more "civilized" than Middle Eastern victims of war.

A CBS correspondent describing Ukrainians in shelters said, "This place is not Iraq, nor Afghanistan. This is a civilized European country. You would not expect, nor want, for something like to happen to it".

Meanwhile, in Texas, the primary is the first test of how Trump's "Big Lie" (that Trump won the 2020 election for POTUS) will play in the midterm elections. Both with turning out his base and the effectiveness of their voter suppression tactics.

And we'll discuss GOP Reps Boebert and Greene's heckling of President Biden at the State of the Union.

Read Chris Hedge's take on the invasion of Ukraine discussed in the show:

CHRIS HEDGES: WAR IS THE GREATEST EVIL
Russia was baited into war but that does not absolve its criminal act of aggression.

Update Required To play the media you will need to either update your browser to a recent version or update your Flash plugin.
Download audio file
Topic tags:
Indigenous, Global Affairs, Government/Politics, Elections, Civil Rights/Human Rights