South of the Slot by Jack London 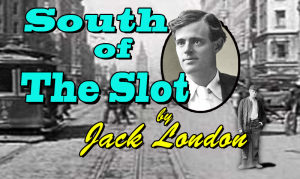 Tonight, Fortunato reads a short story set in San Francisco in the days before the great 1906 earthquake, "South of the Slot" by america's greatest writer Jack London. UC Berkeley sociology professor Freddie Drummon has published a number of well receaved books about conditions among the working people who live in the district south of San Francisco's Market Street: known as The Slot. To further his studies, Freddie decides to assume a new identity as a "working man" to join the work force to observe conditions first hand. But the more he settled into the labor getto the more he begain to prefer his life there than in the respectable society he came from.

Update Required To play the media you will need to either update your browser to a recent version or update your Flash plugin.
Topic tags:
Arts/Culture, Class, Fiction, Labor, Radio Theater
Genre(s):
Arts and Culture, Radio Theatre, Spoken Arts