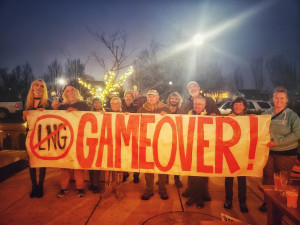 For 18 years communities across Southern Oregon fought an existential struggle to stop the massive Jordan Cove LNG export terminal that was proposed for Coos Bay and its accompanying 36" fracked gas pipeline that would have traversed 230 miles across four counties, crossing countless rivers and streams and threatening over a couple hundred landowners with eminent domain. After years of organizing and agitating, the project was finally stopped on December 1, 2021.

Two years ago I produced a documentary about the long and twisted tale of Jordan Cove LNG and its companion Pacific Connector Gas Pipeline. For the next six months I continued to update the piece as new developments unfolded and it looked ever more likely that the project would be defeated. But it wasn’t until this past December that the struggle to stop Jordan Cove LNG was finally won.

On this episode of Locus Focus we hear the final rendition of the Long and Twisted Tale of Jordan Cove, with the ending that so many people across Oregon have longed for.

END_OF_DOCUMENT_TOKEN_TO_BE_REPLACED

Transpositive PDX
An Interview with Paisley Currah, author of SEX IS AS SEX DOES

Too Much Information with Abe and Traci
The new manifesto