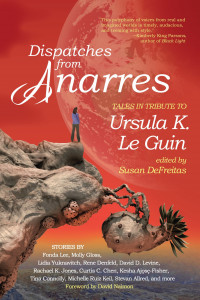 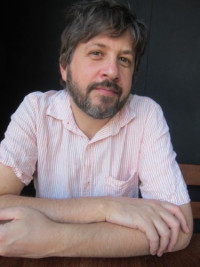 Today on Jonesy, we we pay tribute to arguably Oregon’s greatest writer, Ursula K. Le Guin. I’m sure Ken Kesey would have loved to arm wrestle her for the title, but I think he’d lose. Ursula was not only a brilliant and prolific author, but an activist for the environment and equal rights, and a humanitarian, loved by pretty much everyone in the Portland, Pacific Northwest, and international literary community, with the possible exception of Jeff Bezos.

To honor Ursula, we’ll be focusing on the new book Dispatches from Anarres: Tales in Tribute to Ursula K. Le Guin, from Portland’s Forest Avenue Press, with our guests Susan DeFreitas, the book’s editor, and David Naimon, who wrote the foreword.

Susan DeFreitas is an author, editor, and book coach, dedicated to telling stories that matter and helping others to do the same. Her novel Hot Season won a Gold IPPY Award for Best Fiction of the Mountain West. The Oregonian named Susan “One of 25 Oregon Authors Every Oregonian Must Read,“ alongside writers like Cheryl Strayed, Chuck Palanhiuk, Willy Vlautin, and, of course, Ursula K. Le Guin herself. Susan’s work has appeared in the Writer’s Chronicle, the Huffington Post, the Utne Reader, Story magazine, Daily Science Fiction, and Portland Monthly, among others, and she also contributed a story to the Portland-centric anthology City of Weird.

David Naimon hosts the popular literary podcast Between the Covers, which The Guardian named “One of the Best Book Podcasts” and most recently listed as one of five podcasts that will teach you how to write. He co-authored the book Ursula K. Le Guin: Conversations on Writing, from Portland’s Tin House Books, which collects material from his interviews with Ursula over the years. David was a KBOO Radio colleague of mine, and taught me just about everything I know about doing book interviews. But please don’t hold that against him.

In the words of another wonderful Portland-based writer, Kimberly Kim Parsons, "Dispatches from Anarres is what happens when a bunch of brilliant writers come together to pay tribute to a singular literary giant. This polyphony of voices from real and imagined worlds is timely, audacious, and teeming with style.”