A World Without Police: Interview with Geo Maher 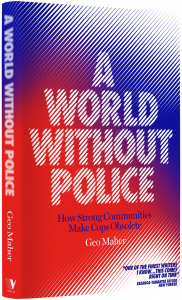 If police are the problem, what’s the solution?

Geo Maher's new book, A World without Police, offers concrete strategies for confronting and breaking police power, as a first step toward building community alternatives that make the police obsolete. Surveying the post-protest landscape in Minneapolis, Philadelphia, Chicago, and Oakland, as well as the people who have experimented with policing alternatives on a mass scale in Latin America, Maher details the institutions we can count on to deliver security without the disorganizing interventions of cops: neighborhood response networks, community-based restorative justice practices, democratically organized self-defense projects, and well-resourced social services.

A World without Police argues that abolition is not a distant dream or an unreachable horizon but an attainable reality. In communities around the world, we are beginning to glimpse a real, lasting justice in which we keep us safe.

KBOO's Jenka Soderberg interviews Geo Maher about his vision for a world without police.

Update Required To play the media you will need to either update your browser to a recent version or update your Flash plugin.
Download audio file
Topic tags:
Activism, Civil Rights/Human Rights, Community Building, Police