2 Eerie Radio Dramas Set in Spooky Houses, Not to be Listened to in The Dark 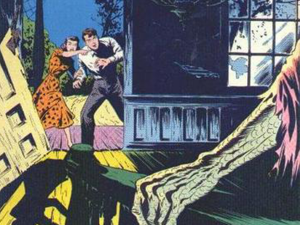 Once again it's Halloween and summer is coming to an end. Tonight, Fortunato presents a pair of scary radio dramas. First, from the series Beyond Midnight, comes The Green Vase by Michael McCabe. A writer seeking solitude buys an old house where he gets more than he barganed for when he discovers a mysterious green vase, that "must never be moved'! And, from the long running CBS series Suspence, Robert Taylor stars in The House In Cyprus Canyon. We dare you to listen in the dark!

Update Required To play the media you will need to either update your browser to a recent version or update your Flash plugin.
Topic tags:
Arts/Culture, Radio Theater
Genre(s):
Arts and Culture, Spoken Arts

END_OF_DOCUMENT_TOKEN_TO_BE_REPLACED

Wednesday Talk Radio
Guam, the Philippines and the accelerating militarization of the Pacific