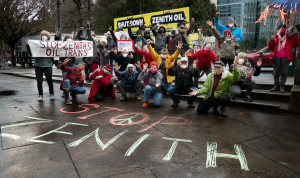 There have been several new developments since the original broadcast of this show, but the biggest news is that on Friday, August 27, Portland City Council denied Zenith's Land Use Compatibility Statement, blocking Zenith's plans to export massive amounts of Bakken and Tar Sands oil through Portland!

For years, community members, organizations, and coalitions have been calling on the City of Portland to shut down Zenith Energy’s dirty, dangerous oil-by-rail operations in NW Portland. When the City of Portland failed to take action, dedicated community members refused to give up. Now, as Zenith’s Land Use Compatibility statement is up for review, the City Commissioners have the opportunity to say no to Zenith—and put an end to oil-by-rail in Portland.

Today we talk with Nick Caleb, climate and energy attorney with the Breach Collective and Erin Saylor, staff attorney with Columbia Riverkeeper, about the need to stop the City of Portland from locking us into decades of harmful fossil fuels, and put an end to the threat that oil bomb trains pose to our communities.

Please read and share THIS ARTICLE from the Sierra Club.  "Can Portland, Oregon Stand Up To The Oil Industry?"  You may also want to send out this Willamette Week article: "20 Oregon Lawmakers Urge Portland Officials to Deny Application to Expand Oil Terminal"

Update Required To play the media you will need to either update your browser to a recent version or update your Flash plugin.
Download audio file
Topic tags:
Activism, Community Building, Energy/Natural Resources, Environment/Climate, Government/Politics

The Songcircle
The Man in Black goes... Paisley???

END_OF_DOCUMENT_TOKEN_TO_BE_REPLACED

The Songcircle
The Man in Black goes... Paisley???