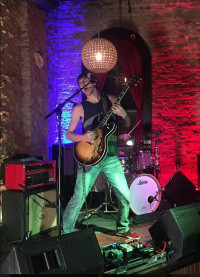 Each day of the festival includes two separately ticketed shows, with a lineup of great local and nationally known musicians. Currently, all the shows are sold-out (except for Monday, July 5th), but you can listen on-air or online to KBOO's live broadcast. We'll be livestreaming the early show from 12-4pm PT each day. You can also watch the second show each day from 6-10pm PT on the WBF site.

Since it's the start of summer, we'll be doing the preview by re-airing our interview with Oregon's own Ty Curtis. Ty has guested on our WBF preview show  every year going back to the start of Mr. Jones's Neighborhood in 2017. Ty joined us at KBOO, along with bass player Ryan Sadler, in May 2019, just a month or so before the very last live WBF before the pandemic. We talked with Ty and Ryan about the festival and their music, and they performed a few songs live in the studio. Ty will again be playing the festival, this time as guitarist for the Bayou Boyz on July 3rd.

To fill out the hour, we'll be playing a few songs from one of my favorite sets ever at the Waterfront Blues Festival, when Ty joined fellow guitar prodigies Samantha Fish and Christone “Kingfish” Ingram on stage. It was billed as the Young Guns of Guitar. Five years later, the guitarists are all a little older, but the music hasn't aged a bit.

It's another beautiful day in the neighborhood!

Update Required To play the media you will need to either update your browser to a recent version or update your Flash plugin.
Download audio file
Topic tags:
Arts/Culture, Humor, Music
Genre(s):
Arts and Culture, Blues