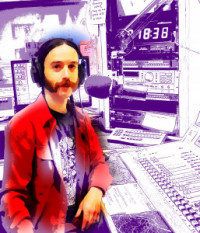 Joe Clement hosts this episode and we hear:

L.A 100%: Bill Resnick and Sammy Roth, an environmental journalist. They discuss a study, commissioned by the City of Los Angeles, that found to the investigators great surprise that L.A. could transition to almost 100% renewables by 2030.

Qanon: Jan Haaken talks with Emaline Friedman about QAnon as a political and cultural phenomenon. They take up the ways the network and products of Qanon actors operate like a business, a religion, and a choose your own adventure for adults.

Pride: from the archives, we hear Denise Morris review the 2014 film, "Pride", a historical comedy-drama about  Lesbians and Gays Support the Miners (LGSM). Led by members of the Communist Party of Britain, LGSM were lesbians and gays who supported National Union of Mineworkers during the year-long strike of 1984–1985 under Margaret Thatcher.

In honor of Juneteenth on June 19th, throughout the show we hear from Grammy award winning musician and Macarther Genius Rhiannon Giddens---first on PBS talking about the class politics of race music, and from her albums Songs Of Our Native Daughters and Freedom Highway. To check out the Black Lives Matter petition to make Juneteenth a National Holiday, CLICK HERE.