June on Pastures of Plenty 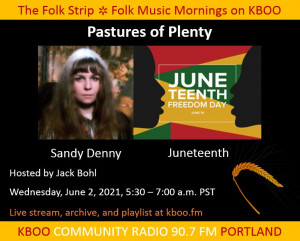 The June 2 Pastures of Plenty program will feature the music of my favorite singer, Sandy Denny, and end with a musical tribute to June.

Sandy made her mark in the pioneering British folk-rock group Fairport Convention before forming her own celebrated band Fotheringay for one brilliant album and then embarking on a solo career that came to a tragic end too soon in 1978. Some terrific covers and Sandy’s own performances showcase her rich musical legacy.

I’m only on the air once a month so I’ll be covering highlights of the entire month of June throughout the second half of the program. The Decemberists offer a June Hymn, Dana Robinson's languid bottleneck guitar sets the mood for Lazy June, and Keb Mo offers "Color Him Father” for Father’s Day.

The remainder of the show is a musical observation of Juneteenth, a commemoration of the June 19, 1865, announcement of General Order No. 3 by Union Army general Gordon Granger, proclaiming freedom from slavery in Texas and subsequently in the U.S., which is today more meaningful than ever. Featured artists include Paul Robeson, Eric Bibb and his famous folk-singer father Leon Bibb, Kim & Reggie Harris, and Seattleite Laura Love.

END_OF_DOCUMENT_TOKEN_TO_BE_REPLACED

Locus Focus
REBROADCAST: Why Hanford Does Not Need Anymore Nukes

Too Much Information with Abe and Traci
Cops out