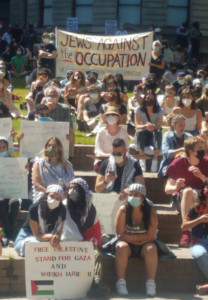 The recordings from this rally will air in two parts:

This is the first part of the rally audio.

Update Required To play the media you will need to either update your browser to a recent version or update your Flash plugin.
Download audio file
Topic tags:
Activism, Civil Rights/Human Rights, Global Affairs, Indigenous

END_OF_DOCUMENT_TOKEN_TO_BE_REPLACED

The Monday Sampler
Still nice out