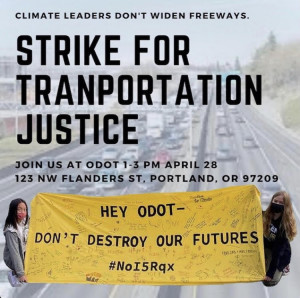 Youth from the Sunrise movement are planning a strike for transportation justice at the Oregon Department of Transportation on Wednesday, April 28th, related to the proposed Rose Quarter I-5 expansion. One organizer is Adah Crandall, a freshman at Grant High School.

The youth strikers have four main demands. First, to have the Department of Transportation conduct a full environmental impact statement on the Proposed rose quarter expansion. Second, they demand an immediate moratorium on all freeway expansions within the urban growth boundary. Third, they demand a stop to House Bill 30-65 and instead advocate for creating equitable congestion pricing, rather than tolling, and to direct those funds toward transit projects, not more freeway expansion. Fourth, they demand the Governor appoint a youth climate justice advocate to the Oregon Transportation commission. They plan on striking every other week until their demands are met.

Update Required To play the media you will need to either update your browser to a recent version or update your Flash plugin.
Download audio file
Topic tags:
Activism, Environment/Climate, Government/Politics, Transportation, Youth