The Seed of McCoy by Jack London 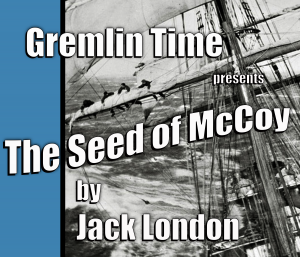 In the last decades of the 19th Century, metal hulled clipper ship sailing in the South Pacific, has a fire in its main hold. The crew seeks an island where they can beach the ship and allow the fire to burn itself out within the steel and copper hull..  But, the sailing ship is at the mercy of the tides and winds, which keep pushing the ship away from islands with suitable beaches. At remote Pitcarin Island, the crew is joined by Old Man McCoy, who knows all the islands in the area like they were his own neighborhood. McCoy, a desendant of one of the original British mutineers of The Bounty, will act as their pilot and guide them to the next suitable island where the ship can be safely beached. Still, the heavy tides and some times the lack of wind draws the voyage out as they are unable to reach island after island.  A  story of adventure and discovery on the high seas of the South Pacific by Jack London. Based on an actual incident. A 3D Radio Production from 2012

Update Required To play the media you will need to either update your browser to a recent version or update your Flash plugin.
Topic tags:
Arts/Culture, Fiction, Radio Theater
Genre(s):
Arts and Culture, Radio Theatre